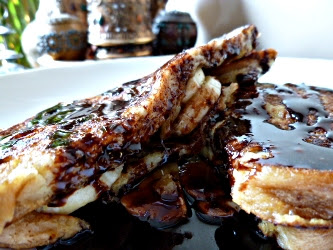 Cinnamon French Toast with Bananas and Chocolate Sauce
My niece is staying for a few days and one thing she always asks for is french toast. She fell in love with it the first time I made it for her which was cinnamon french toast with strawberries, very simple but she loved it! I can't blame her, who does not like french toast for breakfast?


Anyways this time I wanted to treat her to an amazing breakfast. So I decided to combine two of her favourites, bananas and chocolate. She absolutely loved it, so much so she called it "The best breakfast ever!" Oh little kids they do know how to please you.

The chocolate sauce here is made with cocoa instead of actual chocolate. This is only because I ran out of chocolate as I ate them all (Sshh) and I couldn't be bothered to go to the shop early morning just for some chocolate. So I decided to make a syrup type chocolate sauce, which actually turned out great. It was very chocolatey and rich and took this french toast to a new level. However if you do want to make a proper creamy chocolate sauce then you can use the one we used in our chocolate crepe with strawberries recipe

Don't throw the remaining of your chocolate sauce, pop it in a container and keep it refrigerated so you can use it again for other stuff, like ice cream or pancakes.