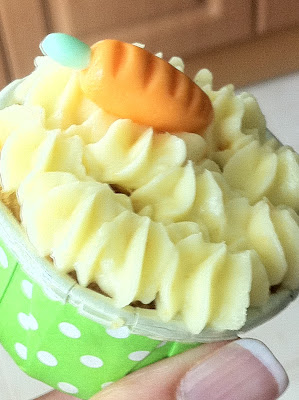 These bite sized carrot Cupcakes are moist and fluffy topped with a zesty cream frosting. The generous portion of Carrot in each cake makes this dessert that little bit healthier!

The recipe I used is a slightly adapted version of a Martha Stewart recipe, which can be found here: http://www.marthastewart.com/343918/carrot-cake-mini-cupcakes

Instead of using maple cheese frosting I used cream cheese frosting. I also pureed the carrots and added a handful of chopped walnuts. Adding 1/2 teaspoon of ground cinnamon really brought out the carrot flavor which was lacking in the original recipe.

For the cream cheese frosting I used 8 ounces of cream cheese, 1 cup of powdered sugar, half a stick of butter and the zest of an orange.

I used No. 21 open star decorating tip to pipe the drop flowers and made the carrot topper using fondant.

I used orange and green gel food colouring to colour the fondant carrots and shaped them by hand. Using a tooth pic, I created fine lines across to give it that bugs bunny carrot look! 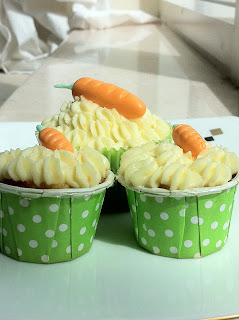 Using a brush I glued the stalks on to the carrot with water.


I also used normal sized cupcake cups with the left over mixture which turned out great too!
Posted by Toslimah Choudhury at 22:03